Behind the Scenes: Creating The Golden Vines® Awards Trophy 2021

Winners need trophies and The Golden Vines, being a state-of-the-art Awards event for the fine wine industry, needed an equally glamorous and iconic trophy.

The Trophy was designed to be symbolic of everything the fine wine industry represents: artisanship, top quality and celebratory. The Trophy also had to be instantly recognisable, unique and iconic. It is the only Trophy in the world to be in the shape of a popped champagne cork, real 24ct plated gold and artwork from a world-class modern artist. To get there involved an enormous amount of graft and a truly collaborative team approach.

Lewis Chester DipWSET, the founder of Liquid Icons, was popping a bottle of Krug champagne on a Friday night with his wife when a lightbulb went off in his mind. He looked at the popped cork, with its muselet and cap, and conceptualised the idea for the Trophy. He liked the idea of what a popped champagne cork represented: celebration. To be voted a winner by hundreds of leading members of fine wine industry is definitely cause for celebration and thus the idea was born for a trophy for The Golden Vines®. 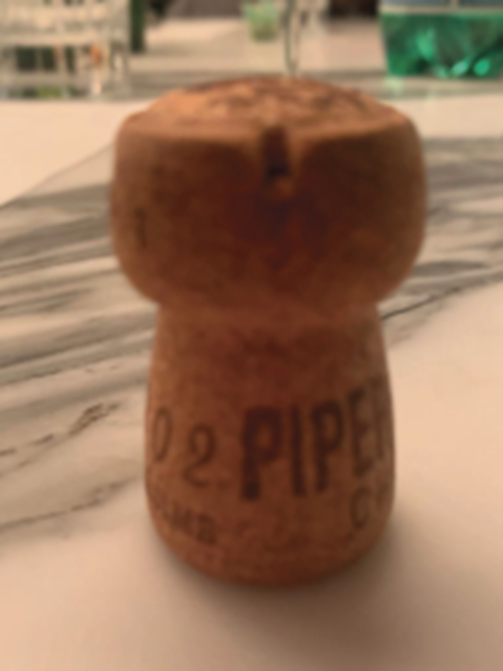 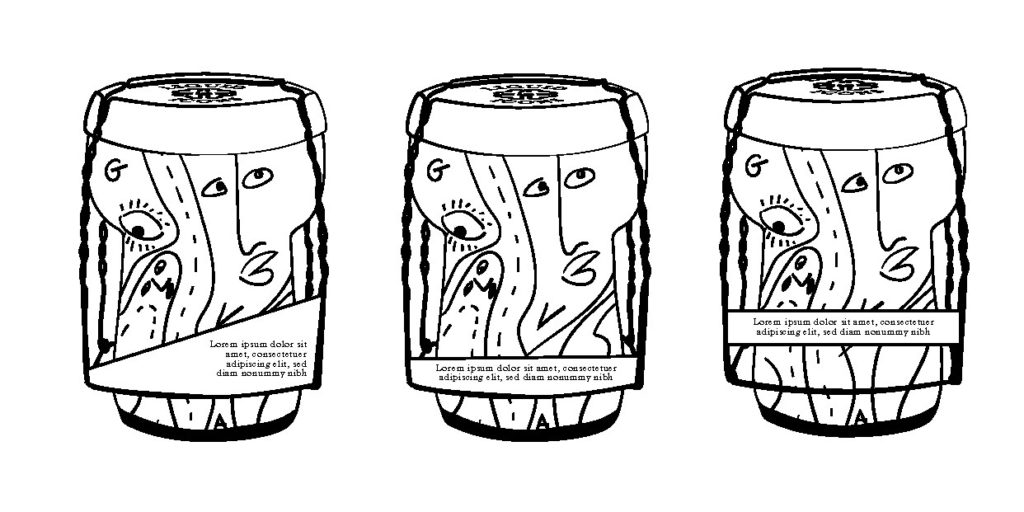 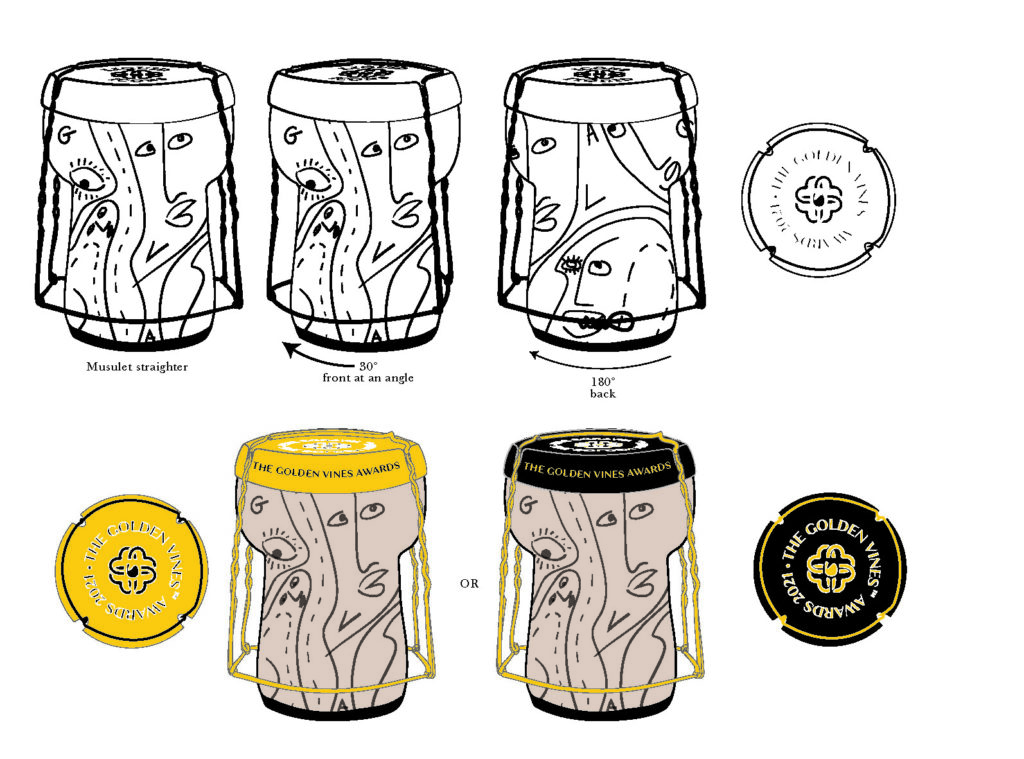 It became obvious to create such a customised design would require the expertise of different professionals and manufacturers for the many component parts: a cork, illustration, musulet and cap.

The first few sketches had to consider the placement of Shantell Martin’s artwork and how it would work on a 3D object, the names of the winners, what to put on the cap, the weight of the cork, and the manufacturing of the musulet and cap. All these had to be correct traditionally and look like a ‘real popped cork’ – just much bigger.

The size of the cork was designed to be 7x larger than a normal champagne cork. Manufacturing a trophy like this required a committed team pushing the boundaries and machinery to the limit and under huge time pressure. 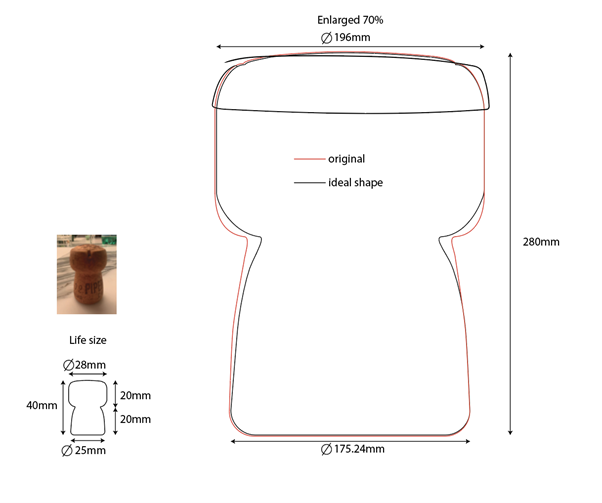 As with any new and innovative product, there were many different technical challenges and learning curves to overcome.

During the conceptual phase renowned New York-based artist Shantell Martin was approached to add her iconic drawing style to the cork section of the trophy. She incorporated themes of vineyards, diversity and inclusivity in her own style and was given free artistic range to interpret the themes of The Golden Vines in her own way. 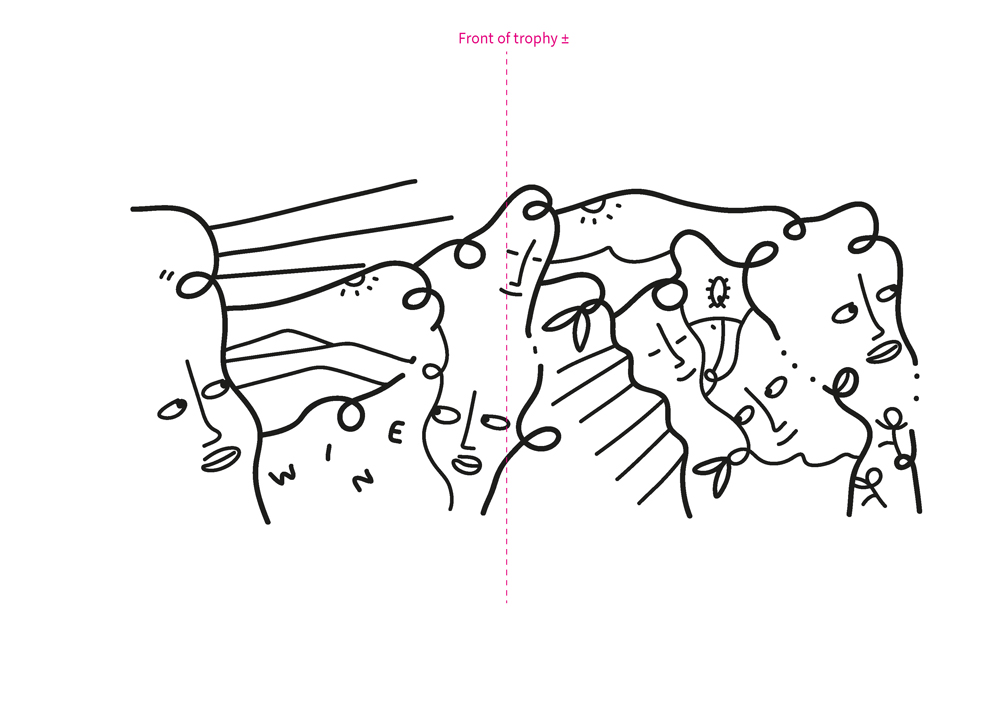 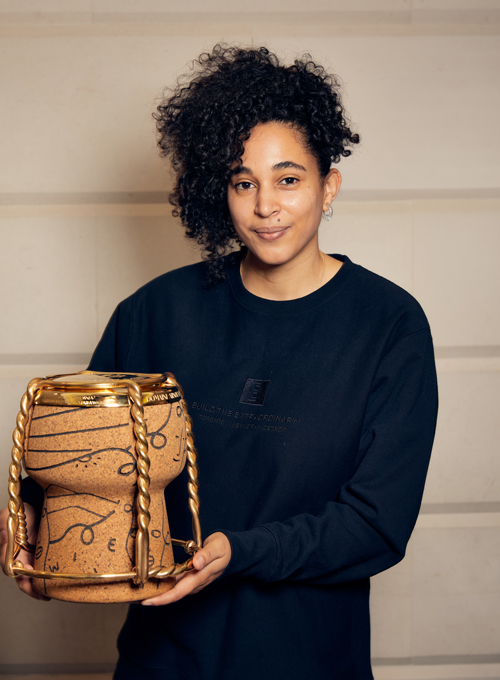 Produced and manufactured by Amorim in Portugal, the world’s largest manufacturer of quality cork stoppers for the fine wine industry. The hardest part of the process was adapting Shantell Martin’s illustration to the shape and curve of the cork by engraving.

The density and cork grain size were carefully selected to achieve the maximum amount of detail without damaging the structural soundness of the cork surface while still retaining its shape, with the illustrations being drilled into the cork by a milling machine. 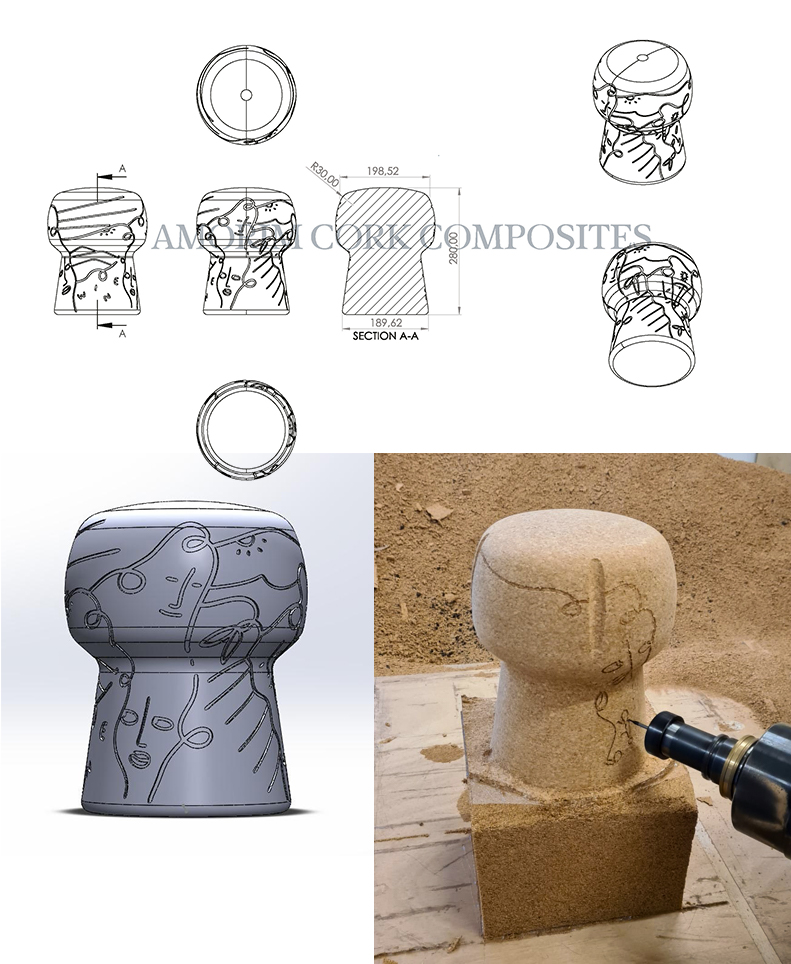 This cork is made from sustainably sourced, recycled cork waste, compressed into blocks and reshaped into cork products.

The final cork was finished off with a protective layer of varnish by myself to give it that gradient and celebratory look as if it has just been popped! 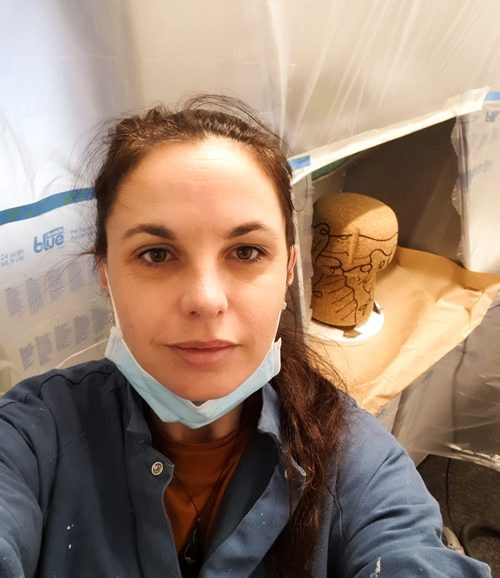 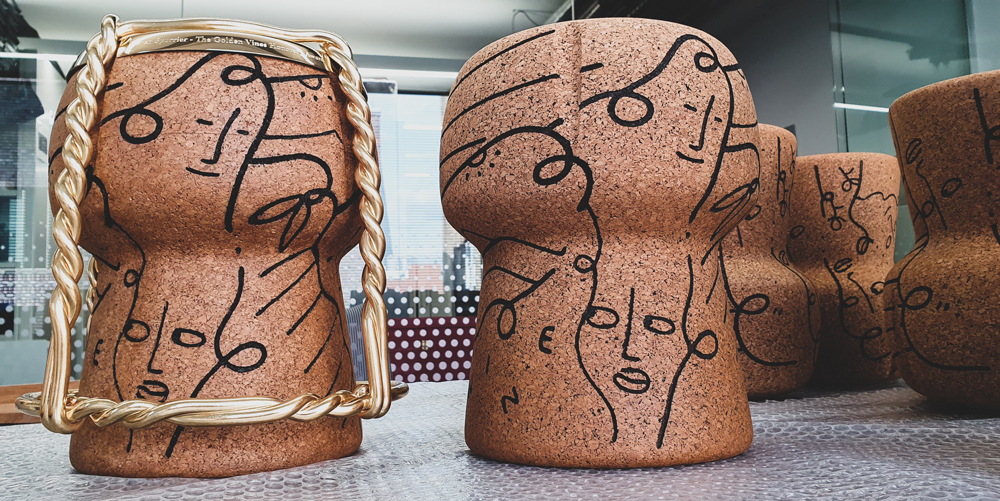 After a gruelling merry-go-round of finding the right manufacturer able to produce a musulet and cap of this size, London-based Grant Macdonald was chosen as the perfect fit with experience in building sturdy and unusual trophies. 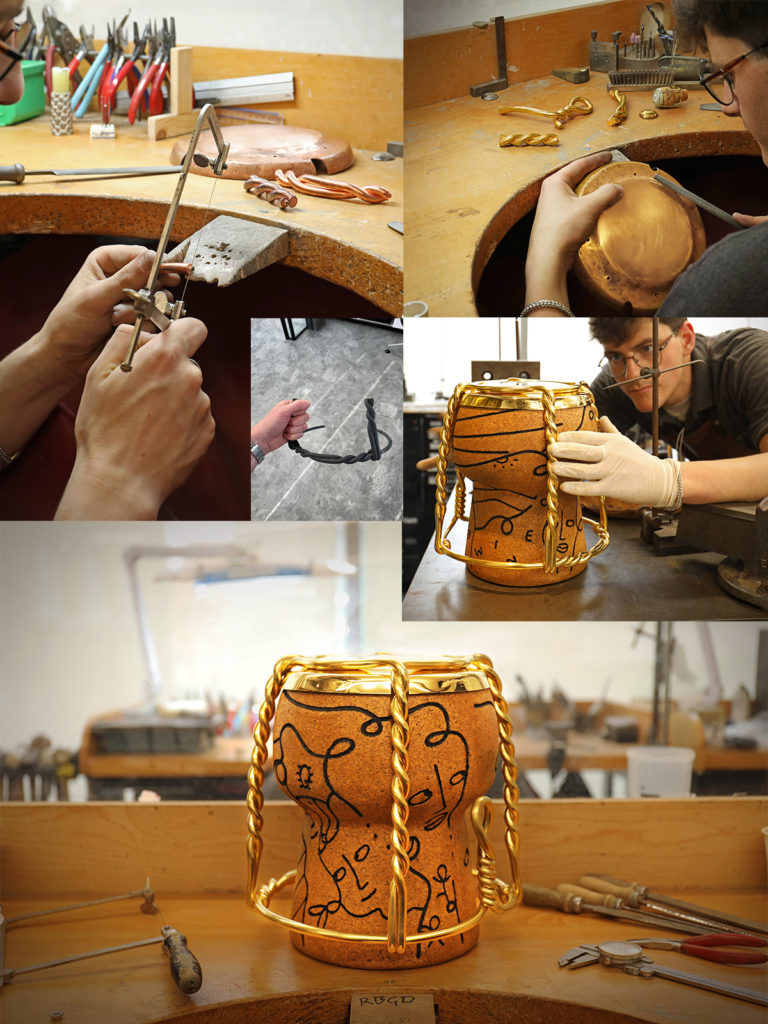 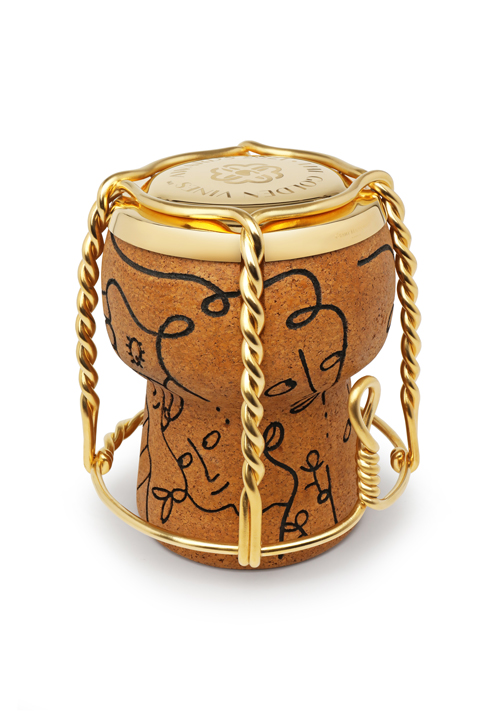 Never before has anyone attempted to create a musulet and cap at 7x the original size. The challenges were to keep as close to the traditional methods of producing the musulet and cap, particularly in the twisting of the musulet – six times clockwise, with the sixth being the last half twist.

The musulet also had to be sturdy enough for winners to be able to hold the trophy up in celebration while still looking in proportion. Grant Macdonald first produced wax models, then cast them in copper and plated the lot in 24ct gold and fitted both cap and musulet to cork.

The Sponsor name, The Golden Vines and Liquid Icon logo combination is engraved on the top of the cap. The Winner’s name and Award on the fronts and sides, and the collaboration team logos on the back of the cap. 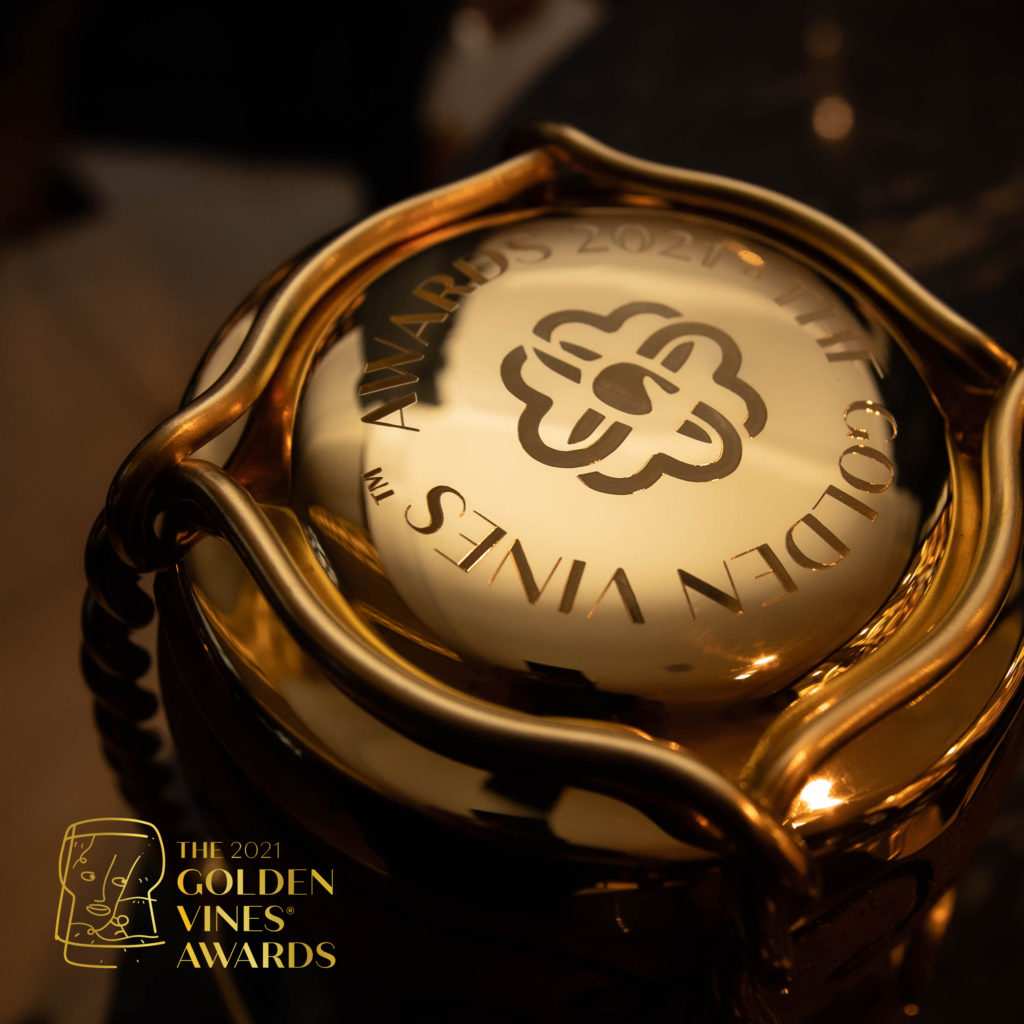 Since the Trophy is so precious, it would not be complete without a safe box to transport it. Lewis Chester’s friend, Pierre Cavin from Tonnellerie Cavin in France, agreed to make the boxes in the shape of a mini barrel. However, technically at the size needed for the trophy to fit snugly within it, this had to be made in the ‘cuve’ shape. 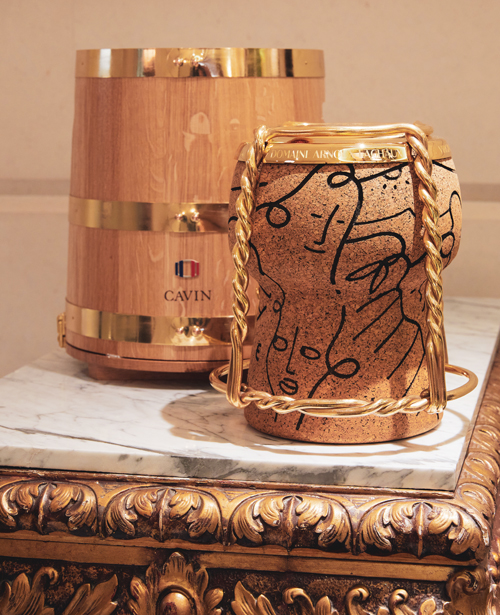 The trophy has a great weight of 6.6 pounds (3 kilograms) in total. No gust of wind will topple this trophy over.

It is truly a very precious treasure, a genuine work of art and phenomenal teamwork which, hopefully, all winners will be proud to show off. 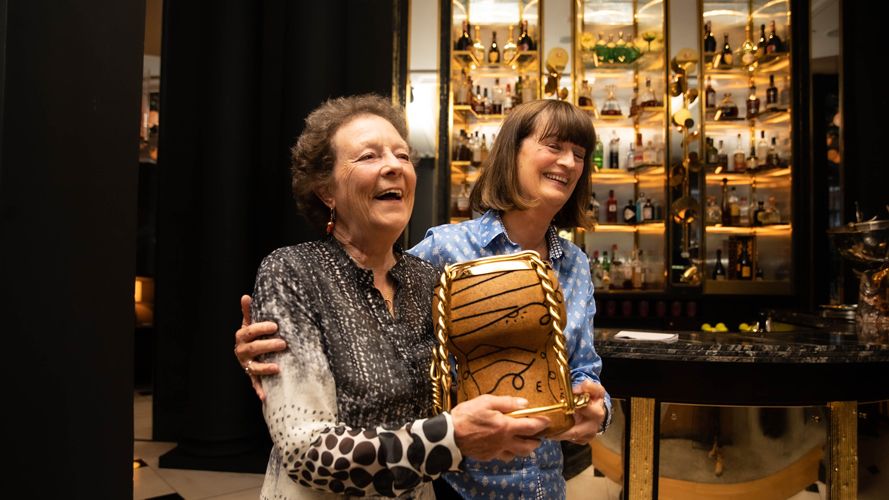 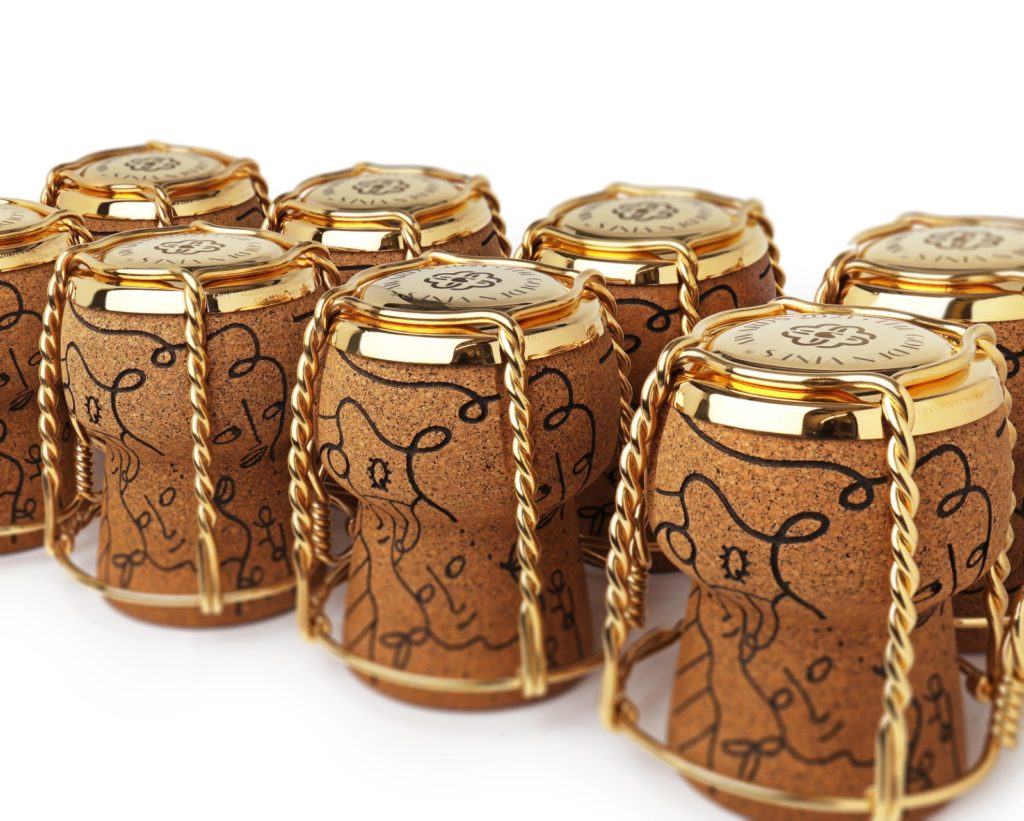 © By Aline Nienaber, Creative Director at Hill and Sky.